First off, hope you all had a safe and FUN Halloween! The only time of the year (well for the most part) that you can dress up as someone/something else and nobody can say a word about it! Cecil sure had his share of fun this past weekend. He Helped out with candy at the Office of Admission (and by help I mean he consumed most of it). 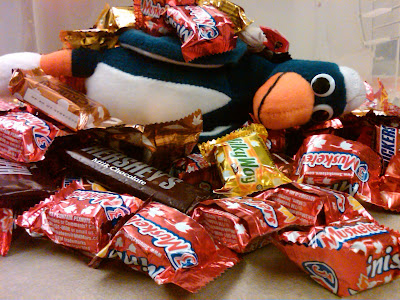 With Halloween comes another celebrated holiday, Día de los Muertos (Day of the Dead). Día de los Muertos is celebrated throughout Mexico and the Southwest states, and coincides with the Christian All Souls and All Saints Days. On November 1st & 2nd people remember those who are deceased. November 1st is considered the Dia de los Angelitos—the day to remember children that have died, November 2nd is the traditional Día de los Muertos (day of the dead). Pictures of the deceased are placed on Día de los Muertos altars with their favorite food and drink. Candles to light their way home, and soap and water to freshen-up after their long trip back are also often placed on altars. Trinkets they were fond of, symbols they would understand, and gifts are left to communicate to them that they are always in the hearts of those they left behind, and that they are still part of the family even though they are not physically with us any longer. 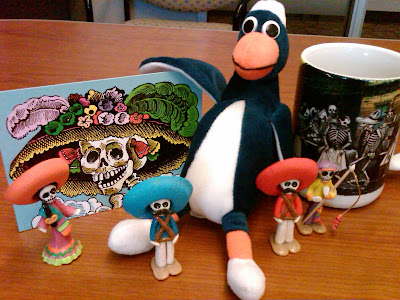 Every year the Latina/o Student Union at Pitzer College puts on an amazing benefit dinner and altar presentation, complete with music from the Claremont College Mariachi group, Mariachi Serrano de Claremont, along with traditional danza azteca (Aztec dancing). This year all proceeds from ticket sales will benefit an AB540 art student scholarship provided by Im: Arte, an art collective based in Los Angeles. Students attending the Fall 2010 Diversity Program will have the opportunity to join the Pitzer community for this much anticipated event!

For more information on Im: Arte visit their website at www.imarte.org 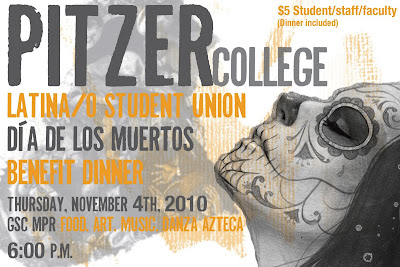 Oh and by the way... this week is the first Fall Preview Pitzer Day (along with the Diversity Program) this Friday November 5th and then again next Friday, November 12th. Check back soon for coverage of the preview days by our one and only exclusive reporter; Cecil T. Sagehen as he takes us behind the scenes of the day's activities.