Hi, readers! For those of you who have been following along for a while, welcome back! If this is your first time reading Admission Unpeeled, welcome! We created this blog over a year ago to provide behind-the-scenes insights into the Pitzer College Office of Admission, and to discuss the admission process in general. Last week we began a four-part series designed to demystify and move beyond the “buzzwords” that we use to define Pitzer’s values. We started with Social Responsibility. This week we’ll be talking about Intercultural Understanding. But first, as usual, some numbers from my travels this week:

The importance we place on Intercultural Understanding stems from a strong belief that our world, and the ways that we hope to make it better, require us to see things from perspectives that might not come naturally to us. Few people reading this blog will honestly disagree that this is a good thing. But what does it mean specifically? Are we talking about diversity? What kinds of diversity? What kinds of cultures are we referring to, and how does this idea play out in our admission process as well as at Pitzer on a daily basis?

Significantly, we want this same diversity from the faculty who guide our education. Pitzer already has one of the most diverse faculties of any liberal arts college in the country, and the administration has made it clear that continuing to diversify our faculty is a real institutional priority.

Aside from who you (the prospective student) already are, we want to see that you crave a diverse environment. Maybe you grew up in the middle of Manhattan with a cacophony of languages and cultures all around you. Or maybe you’re from a small town where almost everyone around you knows your first, middle, and last name. Either way, we want to bring students to Pitzer who can articulate what they’re excited to contribute to the community, as well as their desire to learn from others in it.

The journey only begins once students arrive at Pitzer on move-in day! All of our academic programs require students to incorporate some cultural study that takes them outside of their own community. The major you select or create will need to include at least one course on a non-Western or non-American subject.


Moving beyond the classroom, more than 70% of Pitzer students study abroad before they graduate! Our students go abroad more than those from almost any other school for a number of reasons. First, we actively look for prospective students who are excited to take this opportunity. Second, we think of studying abroad as an integral part of a progressive liberal arts education, not an optional luxury. As a result, all of our Financial Aid packages apply to studying abroad. If students are admitted to Pitzer, then they can study abroad through Pitzer. Finally, our students are encouraged to study abroad by their faculty and peers because we know the value of a community that is enriched by other cultures. When at least three out of four people around a table have spent a significant chunk of time in a foreign country, it changes the kinds of conversations one can have. It will also change what you and your peers do after you leave Pitzer.

Since 2002, Pitzer has been awarded more Fulbright Fellowships than any other school in America per capita. After graduation you can find Pitzer alumni scattered across the globe, literally. Many choose to return to countries in which they studied, others join organizations that allow them to serve a totally new community, and still others simply seem to throw a dart at a map and take off to explore themselves and their world. As a community, we believe that the world would be a better place if more people shared this attitude!

I hope that this gives you a better idea of what we mean when we talk about Intercultural Understanding. If you have any questions or comments we would love to hear from you. Before you go though, take a minute to check out where Cecil the Sagehen has been this week! While everyone in the office is running around the country meeting students this season, we snap shots of Cecil in various locations. If you can figure out where Cecil has been in these pictures, then we’ll send you a prize. Honest! We’ve already had two winners: congratulations to Katie Kecso of West Des Moines, Iowa and Benjamin Levine of Providence, Rhode Island. Keep up the good work!

I went out one night in Chicago and Cecil was unable to join me (past Cecil’s bedtime). I was able to capture some video from the night before a security guard asked me not to film inside the club (sheesh!). If you can figure out who’s singing on stage, then you’ll not only get a prize from Pitzer, but a special nod of approval from me. And we all know how satisfying a nod of approval can be. Until next week, my friends! 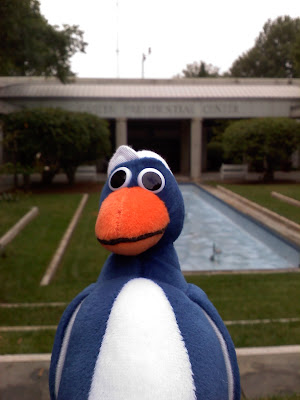 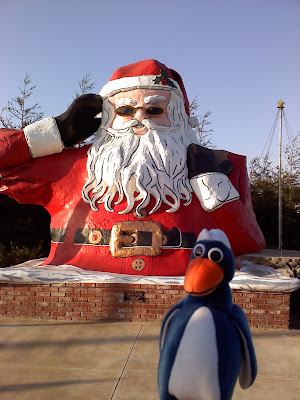 Email ThisBlogThis!Share to TwitterShare to FacebookShare to Pinterest
Labels: Adam Rosenzweig, Where in the World is Cecil the Sagehen

My name is Brian Robbins, and I am from Westtown School in West Chester, PA.

I am so with you on what you said about a potential Pitzer student needing to crave a diverse environment. While my school itself is very diverse, where I come from is not. I have been living on Philadelphia's Main Line all of my life, and I am really looking to challenge myself in a new way. Angel Perez was here at Westtown this past Saturday for a college fair, and he said that Pitzer is looking for students that are willing to step out of their comfort zones. While it is definitely intimidating to leave this "bubble," I am up for the challenge because I am craving something completely new.

Oh, and Cecil is at the Carter Presidential Library in Atlanta in one of the pictures.

I'm famous! :D And thanks for updating, Adam!

I just want to sympathize with you, Brian. I have lived in Iowa for the past 9 years and it's 93% white. I used to live in Hayward, CA (NOT 93% white). The farthest a college has been to come to my school is probably...Colorado. And other than that it's mostly midwest schools.

I hope I see you at Pitzer in the fall, Brian and Adam! :)

Thanks to both of you for the comments. We're still figuring out if this blog can be useful to students, and if so, how best to use it. I'm glad you've found some commiseration!

Brian: email me your address to collect your prize for identifying the Carter Presidential Library!

Both of you: Hang in there. High School is almost over, and the future will certainly bring you new adventures if you're open to them...whatever form they take.

Adam,
Is the singer Buddy Guy himself?

In Chicago, where were the BLTs from? My all time favorites are from Caffe Florian in Hyde Park...did you get to stop off there?

As far as diversity, I was just at Pitzer for an overnight, and was there for part of Diversity Day (even though I didn't get to take part in it...), and it was really cool to see how excited the students were about Diversity Day. I was really happy to hear a lot about diversity for minority groups that a lot of colleges never even mentioned (for example, giving students the option to room with either gender, making it a comfortable and welcoming place for gay and transgendered individuals. Major kudos to Pitzer for making sure ALL minorities are comfortable, happy, and accepted.

Keep up the blog! It's a wonderful resource!