Goodbye, September! Hello, October! Goodbye, summer; hello autumn. Goodbye flip-flops, hello flannels (except in Claremont, where we never say goodbye to flip-flops). This week found me moving farther away from Boston. In fact, I visited a school in Bethel, Maine that is about as far away from Pitzer as any of the admission staff will travel this year. I have to say, despite my California blood, that I am completely in love with New England! The leaves are fully in transition out here and the process is awesome. I drove through White Mountains National Park in New Hampshire and a number of times I almost pulled over and wandered up into the enticing hills. It looked like what an ant would see from inside a bowl of Fruity Pebbles. Amazing. Consequently, this week I want to talk about the lives that we live while we’re “on the road.”

First, for perspective, some numbers from this week:

As you can see, I spend a lot of time in my car. I was thinking about why my colleagues and I do this. Why we wake up with the sun and drive for hours to visit students and schools in locations that are seemingly designed to befuddle our precious GPS devices. Why we say goodbye to friends and family in exchange for hotel rooms and toll booths. I decided to ask my colleagues what are their favorite and least favorite parts of travel season, as well as what music they’ve been listening to on the road.

Assistant Director of Admission, Constance Perez’s favorite part of traveling is meeting students, though she knows it’s cheesy, and going to Sadie’s (the restaurant, not the dance) in New Mexico. Her least favorite part is flying. This week Constance’s playlist includes Stevie Wonder, Prince, and the 500 Days of Summer soundtrack.


Admission Counselor Danny Irving’s favorite part of traveling is getting to start his day as late as ten o’clock in the morning sometimes. That happens on the “almost never” side of “sometimes,” but you can’t blame a man for dreaming. His least favorite is visiting five schools in a day and then having to catch a flight. He also hates white Tic-Tacs (he knows that hate is a strong word). Danny forgot his iPod at home this week, so he has been listening to the distant but familiar memory of his mother nagging him as a child to double check that he’s packed everything before he leaves the house.

Associate Director of Admission Justin Voss’ favorite part of traveling is meeting students, finding good food, and experiencing different weather. His least favorite part is being away from his family. Justin’s playlist this week includes Monsters of Folk and 7 Worlds Collide, as well as Ryan Bingham and the Dead Horses.

Director of Admission Angel Perez’s favorite part of traveling is seeing students in their own elements and environments. He also loves eating regional food! Angel’s least favorite part is airport delays. This week, Angel has been digging Camisa Negra by Juanes, a Colombian artist.

My least favorite part of traveling is the food. I refuse to eat another Hampton Inn breakfast sandwich. I simply refuse. I did, however, find an excellent cup of coffee at a café called The Met in North Conway, New Hampshire! Songs on heavy rotation in my car this week include “I Lost It,” by Lucinda Williams and “No Rest for the Weary,” by the Blue Scholars. I love finding beautiful places in nature, as well as experiencing new and often bizarre scenes of American life. Ultimately, like my colleagues, my favorite part of traveling is getting to meet students and talk about college. It’s the fundamental reason why we deal with late flights, long days, homesickness and headaches. We really believe that Pitzer is an amazing place and we love hitting the road to find the next class of amazing people who will make it their own!

Last but certainly not least, Cecil the Sagehen loves traveling! The proof will be here every week for the next couple of months. Below are some more candid shots of Cecil on the road. Email me at adam_rosenzweig@pitzer.edu if you think you know where Cecil’s been this week and we’ll send you a prize! Cecil’s favorite part of traveling is escaping from predators (which include just about everything) and collecting travel-size shampoo bottles from hotels. Cecil’s least favorite part of travel is all the flying (go figure). Cecil’s favorite band this week is Ryan Adams and the Cardinals (Cecil has a thing for redheads, but who doesn’t?). 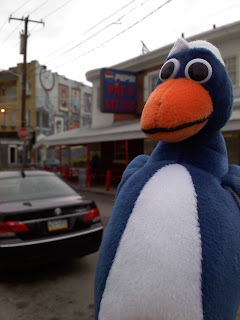 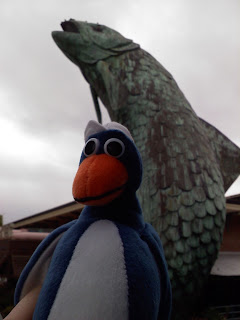