Lions and Sagehens and Gender Neutral Dragons… OH MY!

Just kidding…….about the lions at least.

So for those of you who don’t know, Pitzer shares all of our athletic teams with Pomona College. Together we make up the mighty, fighting Sagehens. 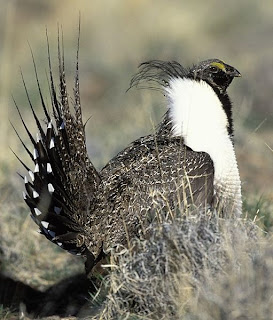 To clear up a bit of uncertainty…..the answer is yes. The Sagehen is a desert chicken. To be more specific a species of Grouse and has a diminishing population, but is not listed as an endangered species due to political reasons (which have nothing to do with Pitzer College). There are many rumors of why the Sagehen is endangered. Most of these have to do with what the animal does when threatened, which ranges from running in fear, running in circles to plucking out its own feathers. Although my favorite theory, and the one most backed-up by internet research, is that the Sagehen population is diminishing due to global warming.

All of our sports teams are D3 and we compete against our feared rivals the CMS (Claremont McKenna, Harvey Mudd and Scripps) Stags (men’s teams) or Athenas (women’s teams). This means we can have a home game and an away game on campus at the same time. This leads to a big school rivalry at a small school that lasts for all of, I don’t know…….1 day and then you go back to class with the people you were cheering against the night before. 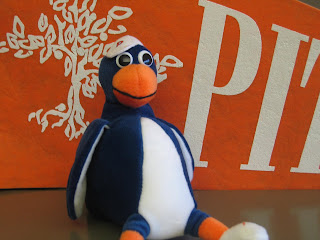 There is something a little off putting about that Sagehen picture, so I decided to post one that is a little more friendly. 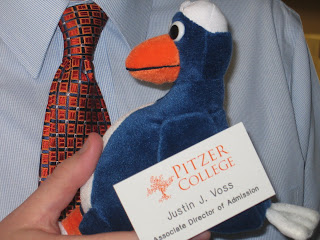 Meet Cecil the Sagehen. He is our official mascot.
He tends to spend a good chunk of his time roaming the admission office grazing and stealing name tags

Despite the diminishing Sagehen population, we have seen a recent boom in our local population. 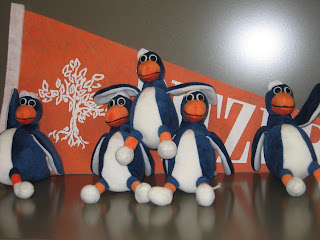 Hopefully you are all slightly amused by these plushies because now we get to our contest.

Where in the World is Cecil the Sagehen
This small army of Cecil dolls will be accompanying us on our travels. Throughout the fall I will be posting pictures of Cecil in different cities around the U.S. If you guess where the picture was taken you get a point. The 6 Pitzer applicants with the most points win a Cecil plushy and the applicant with the most correct guesses will win a plushy and a t-shirt. To qualify for this game you must be a prospective Pitzer student (either in high school, a transfer applicant or a new resource student). Parents I encourage you to read and comment, but please, in the spirit of competition, don't fill in answers to the game.

So now that you know the rules lets start playing!!!!

Since we are just starting out, this week’s picture will be an easy one. 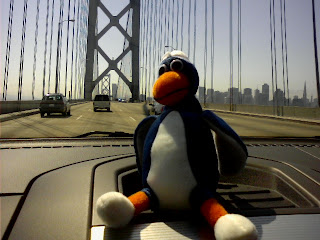 Email ThisBlogThis!Share to TwitterShare to FacebookShare to Pinterest
Labels: Cecil, Pitzer, Pitzer College, Sagehen, Where in the World is Cecil the Sagehen

Danny, do I get to play? I think I know where Cecil is!

ohh I know!
Cecil is on top of a car that is on the Bay Bridge going towards San Francisco!! :D