Hey guys sorry for the delay. For those of you who haven't met me on the road, my travel season has begun. It is official, I love my job. Getting to visit 4 different high schools every day is a lot of fun, but I am surprisingly wiped out at the end of the day. I spent the last week in Texas, 3 days in Dallas, 2 in Austin, 1 in San Antonio and 2 in Houston. It was a new experience for me, but fortunately I had Cecil with me to keep me company. He liked our rental car.
Speaking of rental cars, I already have my first funny, embarrassing story for you. I finished my first day of visits in Dallas and somehow managed to make it to every school without getting horribly lost. However, after finishing my last school visit I was able to turn a 15 minute drive back to my hotel, into an hour long loop around Dallas. Needless to say, I was a little frazzled when I got back. After relaxing for a little bit I decided to go out to dinner, but wanted to get my directions first. It was then that I realized that my car keys were no where to be found. I spent a good 15 minutes tearing my hotel room apart before I went to see if I had left the car unlocked and was able to see the faintest outline of my keys on the back floor on the car. My rental car was a Yarris and for those of you who haven't seen one, it looks like a blown up hotwheels car (I mean it makes me feel tall). So I am assuming that since my briefcase was sitting right above where my keys rested, they must have fallen out of my pocket when I went to grab my bag. At this point I stopped panicking and went into problem solving mode. By the time the AAA guy showed up, forgot his tools and showed up a second time, there was no way I was going out to dinner. Fortunately the hotel served one of the best tortilla soups I have ever had. l
Not only was the food in the hotel great, but it provided amenities above expectations.I mean they even had friends for Cecil 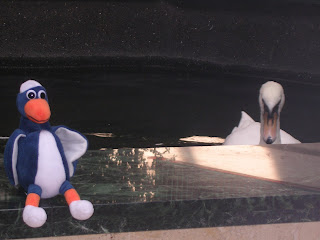 Well I now have a full two days in my bed until I take off on my next trip, but since I made you wait so long for this post, I will be adding a special installment of where in the World is Cecil the Sagehen. Since this is a harder picture to identify, the first person to respond will win a fabulous Pitzer T-Shirt. You have to post your response on the blog this time, so no emailed guesses will count. 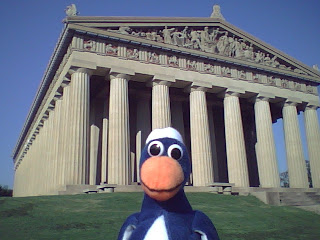 As well, last week's winner was Janelle Alexander, and since I forgot to mention that you need to post your answers online, we have a runner up who also gets a point Jacey Rubenstein.
As well, Cecil is starting to get lonely, so officially follow this blog, by becoming one of Cecil's Comrades on the side of the page and don't forget you can post any questions you have about Pitzer under the comments section of the most recent post.
Posted by Mattie Ross at 8:00 PM

Email ThisBlogThis!Share to TwitterShare to FacebookShare to Pinterest
Labels: Cecil, Dallas, Pitzer, Pitzer College, Texas, Where in the World is Cecil the Sagehen

So after Cecil finished visiting the Parthenon in Centennial Park in Nashville, TN, did he go to the Grand Ole Opry?

PS - How did he like the statue of Athena?

Janelle, you are just a super star aren't you?

You have to wait for Justin to tell you where else he took Cecil in TN though.

Sorry there Janelle, I didn't check the rest of these comments. Cecil was pretty down with Nashville, he likes live music and bbq. He didn't see Athena, but he thought the Parthenon was really cool.

So how many places has Cecil gone to total?

Cecil has been to many different locations (the exact amount a secret). So far there have been 4 chances to guess many more to come soon.