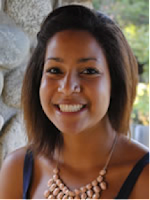 While I was going through my college process during my senior year of high school, I didn’t have a first choice school. I visited several small schools, several big schools, and was convinced that it didn’t really matter where I ended up, just as long as I was accepted and attended a college that I decently liked. Being from the East coast – it wasn’t imperative to me that I go to school far away from home, but it was definitely a possibility once I visited Pitzer and a couple other Southern California schools. I came to visit Pitzer during the summer – although there weren’t many students around, I still fell in love with the place, and felt like I really clicked with the artsy vibe on the campus. Several months later, when I started receiving acceptance letters from college, one day coming home from school, there was a fat orange envelope sitting at my desk, and all I could do was smile. After narrowing down my acceptances, I made a pros and cons list with my top three schools – two larger institutions and Pitzer. When it came down to it, Pitzer had the most pros, so I chose it! At the end of the summer, I packed up one large suitcase, my backpacking pack, and never looked back – I’ve never made a better decision in my life! I <3 Pitzer!
Posted by Cecil Sagehen at 11:41 AM